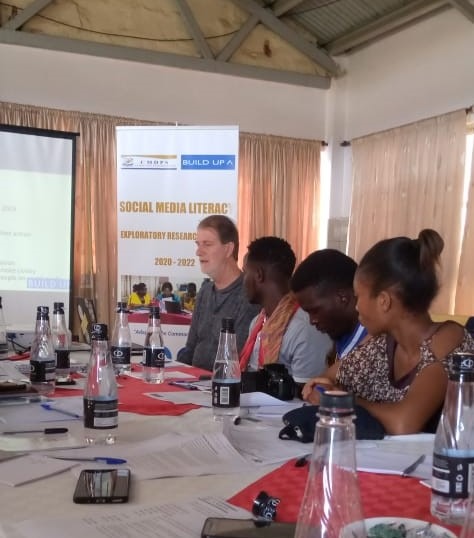 While presenting a M&E Thursday Talk webinar called “Understanding Online Polarization in Kenya-A Digital Peacebuilding Perspective” a couple of weeks ago, the audience raised two important questions. The first question concerned monitoring and evaluating, regarding Maskani[1], a digital peacebuilding project in western Kenya, now in the intervention phase. Audience members wondered how proxy indicators can be used to measure success levels. The second question asked about how we could ensure longevity and sustainability of the Maskani project, keeping in mind the fatigue and loss of interest that sometimes accompanies digital peacebuilding.

These two questions are perhaps the most critical considerations that those in the peacebuilding field, in the early stages of an intervention, should answer. Doing so would likely increase their chances of success when scaling up. To answer these two critical questions, Maskani has devised different approaches. Initially, an ad hoc assessment consisted of trying to establish the levels of interest among the few (roughly ten) students who were a part of the digital peacebuilding pilot at Rongo University. We also assessed the momentum that the students had gathered, in terms of numbers and online content (posts and interactions), that enabled the pilot to expand to include students from other universities.

It was an exciting experience to see the student numbers surge from ten to sixty students from six public universities in Western Kenya (Rongo University, Maseno University, Kisii University, Kibabii University, Masinde Muliro University of Science and Technology and Jaramogi Oginga Odinga University of Science and Technology). This was overt material evidence that the project was worth exploring and advancing to the next level. In fact, the co-founders of Maskani, Build-Up and the Center for Media, Democracy, Peace and Security-Rongo University, have gone ahead and partnered with Knowledge Platform Security and Rule of Law (KPSRL). This partnership has since organised a workshop for their annual conference in October 2020, where we will seek feedback and advice on scaling the Maskani Project nationally.

Initially, we began exploring the project’s feasibility through experimentation with the many cases of online polarisation in Kenya, an experience that brought about a minefield of ideas, many in the form of Twitter and Facebook posts, hashtags, and other online reactions. It was at this point that we realised the true strength of hashtags on platforms like Twitter, especially when dealing with trending issues. For our project, it became clear that the hashtag has emerged as an especially strong and influential tool, akin to the DNA of the project. Maskani is currently informed through a positive hashtag called #NguvuPamoja or #StrengthTogether, which emphasizes the need for unity, support, and teamwork among dedicated digital peacebuilders.

Since this development was still not enough to assess any significant success for the project and its M&E, it was important to be strategic moving forward. This called for regular Zoom feedback sessions to reflect and understand the challenges students were facing in digital peacebuilding, in real time. This led to us holding several back and forth feedback and brainstorming sessions before we could move forward with the objectives of the project. From these sessions, three important focus areas emerged: (i) Politics (ii) Ethnicity and (iii) Covid-19.

But why these three focus areas? Due to the wholesale and chaotic nature of different ideas posted by students in the initial stages of the project, it was critical for the project to identify its focus areas, as to not appear to be intervening on everything. These three issues became central to the direction and focus of the Maskani, which allowed us to measure and collect meaningful results and successes. But this was not all, the three topics were also important ecological factors for genuine peacebuilders in Kenya to consider. Offline, Politics, ethnicity and Covid-19 are serious issues that impact the lives of Kenyans in significant ways. One thing that was clear though, incited by the second question, was the idea of incentives to sustain student interest and engagement. It became clear that digital peacebuilding would fail without creative incentivisation.

So for a properly designed M&E compliant intervention, Maskani has devised a number of activities to incentivise the students – helping them to not fall off the project. These incentives include, allowing students to continuously contribute to digital peacebuilding from within their own comfort zones. Other creative incentives for motivating students in the project consist of key components summarised below:

In the bi-weekly sprints, each two-week period focuses on specific digital peacebuilding roles with opportunities for deepening learning and encouragement. We structure activities around practicing associated strategies on our three priority topics (politics, ethnicity and Covid-19). For example, currently there is an ongoing sprint on promoting positive messaging and de-escalating polarising social media posts, which might include any of the following:

Competition is an interesting way of incentivising students and keeping them engaged. This is done by awarding digital badges, internet bundles, and cash prizes to winners.  A student could be awarded digital badges for being a positive messenger, model of peace, peacebuilding insider, de-escalator, depolariser, and Maskani polymath. If they complete all five sprint challenges, they will receive all five of these badges. Awards for Facebook group engagement includes learning edge (sharing at least three trending topics with a group linked to sprint challenges), learning champion (sharing at least three lesions learned linked to one’s own digital interventions), growth champion (sharing at least three requests for advise/ support linked to one’s own digital intervention), peer support champion (responding to at least three requests for advise/support from other students, and MVP (completing all  four engagement challenges).

The most exciting part, relevant to our key concern regarding an M&E compliant digital peacebuilding strategy, is where students are requested to self-report on the sprint challenges. This is a very important part of our project’s data gathering and helps us track the project’s impact. These self-reports are also very crucial for our reflection sessions, and the evaluation we will undertake at the tail-end of our interesting, Maskani project.

[1] Maskani is an ambitious online digital peacebuilding project involving six universities, over sixty student and twelve faculty members. Maskani is a collaboration between Build Up and the Center for Media, Democracy, Peace & Security-Rongo University and six public universities in Kenya. Rongo University, Maseno University, Kisii University, Kibabii University, Masinde Muliro University of Science and Technology and Jaramogi Oginga Odinga University of Science and Technology. The project is more recently collaborating with the Knowledge Platform Security and Rule of Law, The Hague, Netherlands in the latter’s 2020 Annual Workshop under scaling the project.